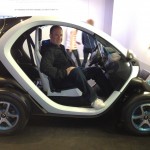 As an entrepreneur and business person you always wonder what’s the next big thing? On a recent trip to Paris I spotted a 2-seater car from Renault called the Twizy!

The first impression is that the car is very cool, trendy, and fun! When we went into the Champs-Élysées showroom the presentation was impressive with many colorful Twizy’s throughout the floor as well as a full screen video (see below), computer displays to make custom orders, and alot of buzz to compliment this new offering.

The rear-engine car is part of Renault’s plans with Nissan to rollout a broad range of electric cars which will include other models called Fluence, Kangoo and Zoe which are expected in Europe in 2012 and beyond.

The Twizy, Zoe, and this line of cars, is of particular importance because it will have a “swappable battery pack” (a.k.a. QUICKDROP charging) so that the cars’ owners will be able to take advantage of battery-exchange stations such as the ones battery-infrastructure developer Better Place is building for locations such as Israel, China, Japan, Denmark, Australia, North America, European Union, and around the globe.

The initial Twizy’s will have standard electric recharging of a leased battery but overtime will take advantage of the QUICKDROP system.

So the Twizy looks great… It supports a niche in the marketpace when you consider the multitude of bikes, scooters, cycles, and small vehicles (i.e. SMART) being used in cities and with short-range commuters…  So who will use it?  A few insights include:

So while the Twizy is certainly not for everyone, it does capture the imagination on an emerging way to travel. There’s a huge number of people who commute or do short trips to the grocery store and only need to spend an hour or two in their car.

In the future, with the battery swap packs, owners will be able to swap out new batteries by going to a QUICKDROP stations, plug in at home, or at electric docking stations which are emerging in the United States (i.e. Malls) and which are much more visible on the streets of London and Paris as exclusive parking spots for electric only vehicles.

So while the Twizy will not be in the US in 2012, if it takes off in European cities such as Paris, Madrid, London, etc. then you can expect to see it or models like it over the next few years. The Twizy is the “fun car” in a line of new models which have a very good chance to make an impact both now and over the next few years.

Check out the official YouTube video (below) that Renault presented on a full screen in the showroom which is known as a “pop of serenity!”

Are you ready for the Twizy and the rechargeable technology amidst rising gas and oil prices!? Or do you simply like the idea of having some fun with this new, trendy, transformational car?

Eiffel Tower: Would you take the stairs or elevator? 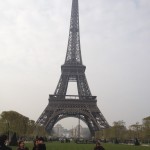 My family and I just finished a wonderful vacation in London and France. One of the many highlights was arriving in Paris and visiting the Eiffel Tower.

Sharon and I had weighed going to the top of the tower versus just stopping by and walking around it. Both of us had visited Paris in years past and felt we would be happy either way. However, once my teenagers saw this amazing global icon there was no doubt (or uncertainty) when they “insisted” we go up it and see it for ourselves. In fact, it became a mission long before we even got to the base of this impressive structure! 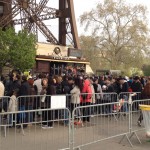 Prior to going on our family holiday we had heard a few points of view including: the need to get tickets in advance; long waits to go up the elevator; and the hotel said it was booked ’til June. Because we were on the fence about going up it until we got there we did not have advanced tickets. Perhaps we would be out of luck and miss a chance for a lot of fun?

Suddenly it occurred to me that if you were willing to walk the 1710 steps then there might be a way to have a little adventure. In fact, I was thinking there had to be a way to go straight up without a wait.

As we assessed this possibility I was reminded of Zig Ziglar, the renown salesman, motivator, and author, who told the famous story of the Washington Monument and that “you can take the stairs to get to the top.” He reminded us that there are long lines to achieve success and dreams but if you’re willing to put in the work and climb the steps one at a time you can achieve your goals. Now we were watching this story unfold in front of our eyes. 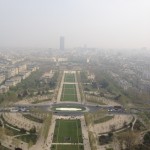 Without hesitation we found the ticket office for the stairs only. A few Euros later we were on our way. As I looked down I saw the long line to the elevator. I was happy to have the opportunity to view Paris from 320 metres (1,050 ft) or about the same height as an 81-story building. Most importantly we were on our way without any roadblocks to see what it looked like from the top.

As I experienced the tower and learned about Gustave Eiffel, the visionary designer whose company built the tower, I realized that there were many hidden gems to learn about by way of invention, innovation, and engineering accomplishments that have inspired visitors from around the world including:

As I climbed down the steps and finished this amazing adventure I wondered how many times we realize that opportunity exists if we are willing to apply ourselves one step at a time?

If we wait for the long line…we might find we’re still waiting long after the opportunity has passed us by!  With success and confidence comes the opportunity to climb to new heights on our vacations and in our daily lives!